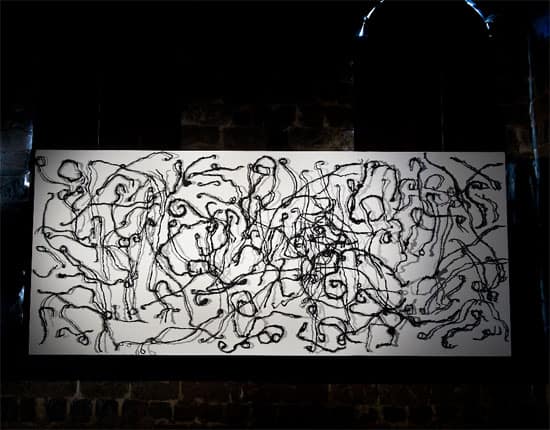 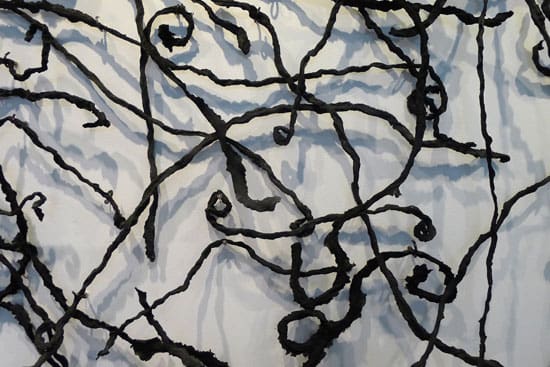 The long black corridor at the middle of the blast furnaces takes you to a work of the whitest white and black. At a distance the impression is strictly graphic as if it were drawn or printed. As you get closer the relief appears – the black threads reach out into the smelting house, guarding their territory, but are held back by the crossing threads that wind around to bind them fast. A tangle! Maybe it’s a person’s thoughts – dreams, expectations, associations, grip on reality….

Gabriella Göransson’s work is called just that Virrvarr (Tangle) and has found its place in the smelting house. It’s a textile work, made by hand of dyed linen that has been ground down to a fibre mass. The artist describes the work as a long, meditative process where she step by step sorts, dyes, grinds and then intuitively shapes the individual parts that only become a whole when in place in the art gallery. Not everything can be controlled. The linen has a life of its own. The ray of sunshine coming though a crack in the wall introduces a completely new, unexpected contour.

“Linen has an expression like life itself. There is duplicity – the hard, strong and the brittle, fragile. Linen shrinks. Linen twists, on its own, in an unexpected way. Linen is a natural material and Nature is an important source of inspiration in my creativity.”

“Textile lines and shapes but the gap between them is also decisive in my work. The space creates tension and contrast, illuminates the overlaps, crossovers and meetings.”

There are many who see Nature itself in Gabriella’s work, serpentine vegetation on the seabed, graceful bare branches in a tree, gauze-thin patterns of insects, maybe even a seahorse. In the old ironworks thoughts can also be drawn along an path of industry’s history, lingering remains of iron production and belief in the future. She herself believes that all art is a transformation of yourself – both the artist and the onlooker have their own experience of the world and therefore the right to their own interpretation.

Gabriella Göransson has an international perspective. Born in 1959 in Florence where her father, the painter Per Göransson had a scholarship, raised in Bjärka Säby outside Linköping and Norway’s capital Oslo, she has exhibited in the UK, Estonia, Lithuania and Germany. She has participated for several years in a Norwegian-Japanese cooperation where artists, two and two, work together to bridge the linguistic gap with art and references to Nature, not least childhood with thousand-year-old trees. She studied at the Norwegian Royal School of Art and Design and lives in Oslo.