Together with Anniken Amundsen I started ”CULTEX – textile as a cross-cultural language” which involved norwegian and japanese artists. The first exhibition venue was at galleri F15, Moss, spring and summer 2009. The exhibition toured in Great Britain and Japan in 2010 – 2011.

My works at the Cultex exhibition at Galleri F 15 – 2009.
Title: Out of Darkness“.
In collaboration with Kyonori Shimada.
Read story by Lesley Millar.

Title: “Return“.
A site sensitive installation made of flax which I wanted to perish. Last picture from April 2011. 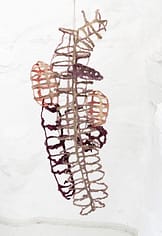